Through my connections from 20 years in the cycling industry, I was approached by Swiss cycling apparel maker ASSOS for a retail apparel project. Well known for their quality, ASSOS is a small company and my favorite kind of client: bike related, design related, focused on quality.

About a week into the project they told me that it wasn’t really the most pressing project they had on their docket and asked if I’d be interested in helping with the leaders’ jersey designs for the Tour of California. Uhhh—YES. And also—YES. 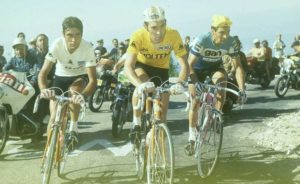 Leaders’ jerseys in the Pro Peloton are fairly straightforward. Tradition dictates: Yellow for the Race Leader (unless you’re in Italy this week), Green for the Sprinter, Blue for the Most Aggressive, White for the Young Rider, and of course Red Polka Dots for the Climber’s Jersey. This could have been a very simple project, but I wanted to push it a bit; this is ASSOS’ first year sponsoring the venerable Amgen Tour of California—the largest professional bike race in North America.

I took cues from each leader’s jersey sponsor and created themes around them that also related to California as a destination. Then I worked through creating tonal color relationships so the primary color of each jersey was consistent with ASSOS’ inline 2017 retail jersey line, while still keeping the overall look of the jersey consistent with the traditional color themes. 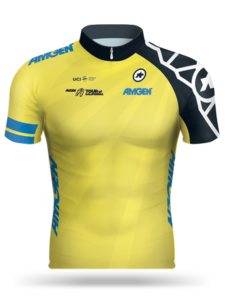 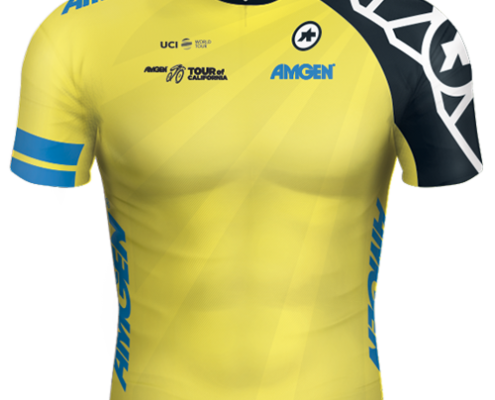 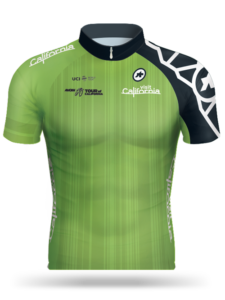 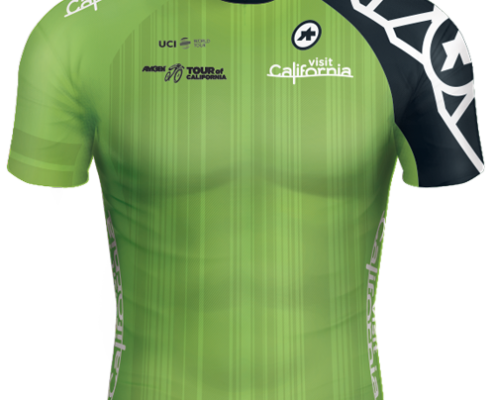 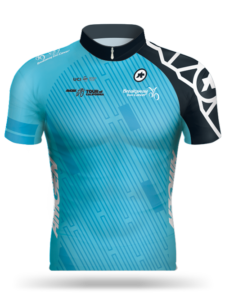 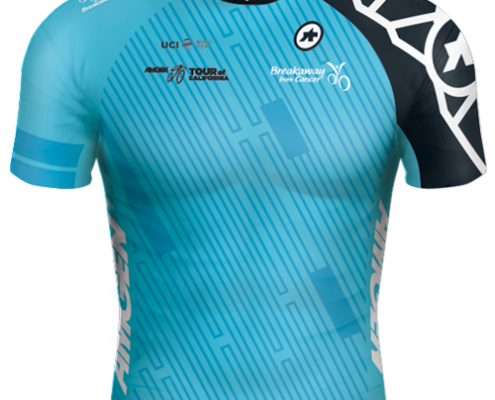 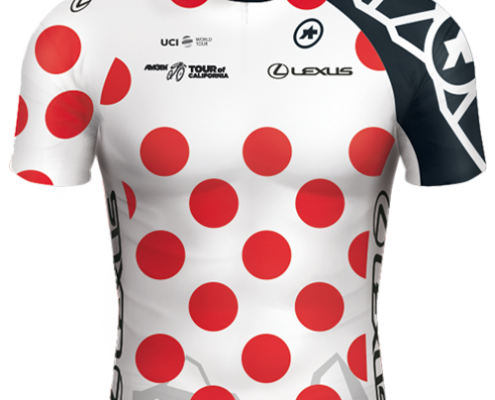 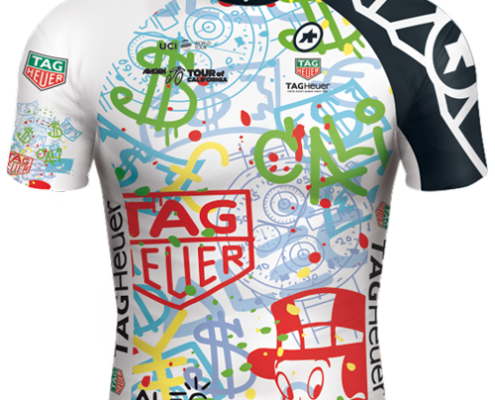 Amgen Leader’s Jersey—Yellow rays of sunshine for the Sunshine State. It is upbeat and positive, which reflects Amgen’s cancer research and their work towards curing cancer.

Visit California Sprinter’s Jersey—Green vertical lines reminiscent of the forests and parks that millions of tourists flock to California every year to visit.

Amgen Breakaway from Cancer Most Courageous Rider’s Jersey—Blue technical shapes representing circuit boards and electronics, the visualization of data, and the innovation that California is known for around the world.

Lexus Climber’s Jersey—Red polka dots with the silhouette of the Sierra Nevada—one of the world’s most famous mountain ranges—at the bottom hem, keeping the design modern and sleek.

TAG Heuer Young Rider’s Jersey—ASSOS had a special opportunity to work with world-renowned artist ALEC on the artwork for this jersey, making this a sought-after piece of art as well as a jersey that reflects the spirit and energy of the young riders in the peloton. ALEC’s team provided us with original artwork and then I worked this into a design that sat on the clothing pattern and kept the most unique pieces of the artwork represented in a space that would print well. 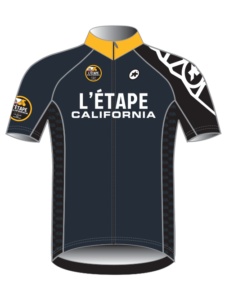 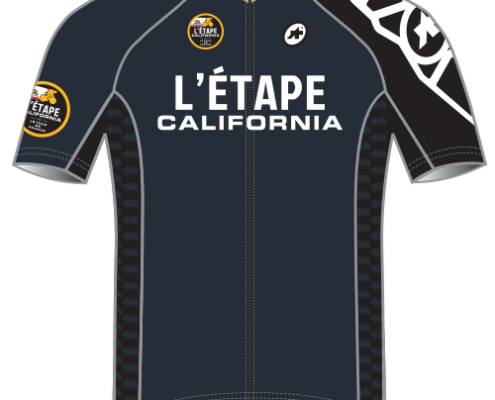 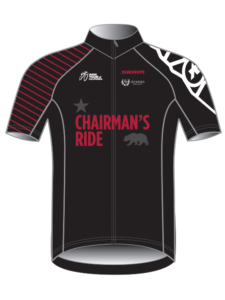 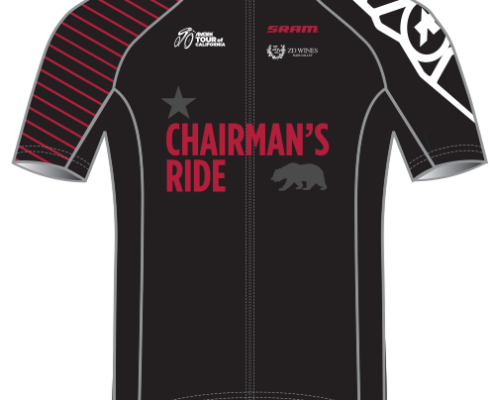 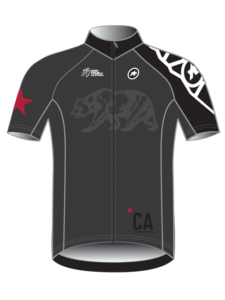 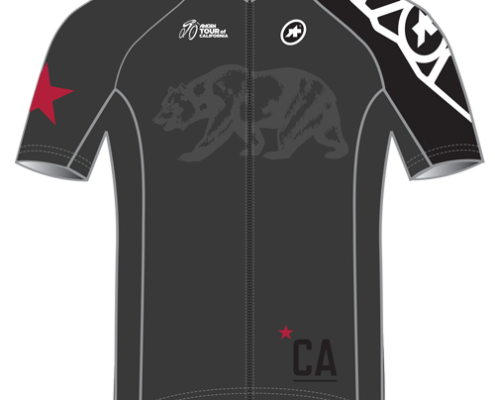 I also got to design the L’Étape California Jersey, the Chairman’s Jersey, and the Commemorative Retail Jersey. Hop on over to the ASSOS webstore to pick up any of their retail jerseys »

It’s always exciting to see the work you’ve produced out in the world, alive and breathing. But this is next-level. Watching the live stream [here] every day of the race and seeing work that we’ve designed on some of the fastest cyclists in the world, rolling through towns and cities that have been my home stomping grounds for much of my life, is pretty great.

It is true. I’m super excited to get this new website launched. This is the 3rd version of our website i’ve built since launching Spaceboy Creative back in 2014—but this is the first version I’ve really* liked.

As a business that builds websites it is REALLY HARD to build your own site. We have a design perspective and opinion- but we also have to balance that with the perspective and opinion of our prospective clients (hey—maybe that’s you! If so say Hi on this page!). A website is a tool that is one part marketing of your business and one part sales tool. And the most effective way we see of building a site that appeals to a large and diverse client base is by building a site that is minimal, modern and clean (i know- everyone who works with me just rolled their eyes because i say that about everything), and that is mechanically dialed. That is my biggest focus on this site.. building out the tools that make this an effective sales tool for us- but is also a venue for getting our work, ideas, and opinions on the state of design and the world out to the masses. It’s valuable for everyone to see our past work… but it is even more valuable for everyone to hear what we have to say, to get a glimpse of the ideas and strategies behind the work that we do. This is a chance for us to say do as i say AND as i do…

So enjoy! Drop us a line if anything is broken ????